The Benefits of Screen Time for Young Children

Before the increased use of computers, smart phones, and tablet devices, screen time was defined as passively sitting in front of a television. Today, newer technologies are evolving and advances happen quickly. There is anecdotal evidence showing that screen time can have a positive impact for all children. However, it should always support positive parent-child relationships.

For some children with disabilities, technology can give them a voice in the form of an augmentative and alternative communication (AAC) system and open new doors of possibility. For others, it can provide resources that help children anticipate what is coming next and what is expected of them.

Additionally, there are countless applications that enhance and reinforce learning, social skills, play, and language and communication.

Technology Can Be Motivating

Digital, interactive media — such as applications or devices — can be highly motivating. It can boost skill development when used in appropriate amounts and with appropriate supervision. 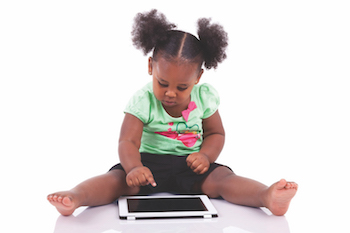 Face-to-face interaction between parents and children is very important. All children should have many opportunities to play and explore when tablet or smart phone screens are turned off.

Finding a way to balance the use of technology may be challenging for some families. Below are a few tips to try:

Technology is One Tool

Mobile devices contain features that provide children and adults a wealth of educational and engaging material to which they may not otherwise have had access due to physical, behavioral, or social limitations.

These devices can do things as complex as providing a way to communicate and as simple as being a conversation starter between children. Technology is a tool, and like any tool its effectiveness and value is determined by how it is used.

Take It Out for a Test Drive at PACER’s A.T. Lending Library 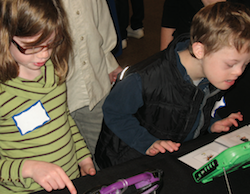 For children and young adults with disabilities, discovering the right assistive technology (AT) can be life-changing. Thanks to the resources of the Lending Library at PACER’s Simon Technology Center (STC), families and professionals can learn about the latest technology and take it home for a trial run. Lending library members can borrow as many as six items at a time for as long as four weeks.

The library has a wide range of mobile AT apps, and members can borrow an iPad to try these applications at home including AudioNote, which Augsburg College student Sam Graves uses to record lectures. “It has been extremely useful to me since it takes me a while to write,” said Graves, who has cerebral palsy. “I have been coming to the STC since I was 3 years old and have had great experiences there.”

The STC has recently added some exciting new technology, including the VGo Robot, the UbiDuo Wireless Face-to-Face Communicator, and the Tobii Eye Mobile, state-of-the-art devices that can dramatically improve the quality of life for individuals with a broad range of disabilities.

Lending library members are encouraged to provide feedback and submit reviews. “Because of the library I bought a Livescribe smart pen and was able to access the Co:Writer app. What a wonderful resource!” one parent wrote. A professional who uses the lending library said, “I appreciate the efficiency of the loan and the availability of the devices. My client loved the new features (of the device) and Medicare covered the cost!”

Assistive technology doesn’t need to be expensive or sophisticated to make a positive difference in the life of a child with a disability. Sometimes the most effective devices can be built at home by do-it-yourself moms and dads. Here are a few examples worth exploring.

Transitions from one activity to the next can be difficult, especially after preferred activities like playtime and story time. When it’s time to clean up or start a new activity, help make the transition easier with an object calendar. The object calendar will help your child anticipate what activity comes next. Divide a small shelf or a board into sections using masking tape. You can place objects representing an activity on a shelf or board divided into sections using masking tape. The number of sections depends on how many activities will be in your child’s schedule. Find small objects that represent those activities. For example, toy food could represent lunch time, or a doll’s pillow could represent nap time. Put the objects in the correct sequence on the appropriate section of the divided shelf. Once the activity has ended, your child can place a dish towel over the object to show that the activity is “all done.” 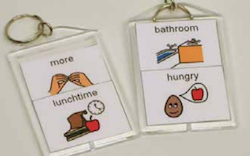 Electronic communication devices can’t always be taken everywhere—like to the pool or to a park—but without a way to communicate, your child may become frustrated and throw a tantrum. This communication key chain will allow your child to share food and activity choices without having a problem. First, create several picture communication symbols, print them out, laminate or place them in a clear key chain, and attach the key chain to your child’s belt loop or backpack zipper.

Some crayons, markers, or utensils may be hard for your child to hold. This adaptation can be used in coloring activities and to help make mealtime less messy. Use empty prescription bottles or an old 35 mm film container and remove the bottom of the container with a scissors. Insert the utensil or crayon into the hole and anchor it by placing playdough or modeling clay inside the container. 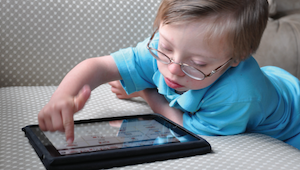 Until six months ago, 5-year-old Leo Foley, who has Down syndrome, communicated primarily through sign language. When his mother, Brenda, couldn’t understand a sign, he would become upset and start having tantrums. The situation was frustrating for both Leo and the entire family, Brenda says.

That’s when she decided to purchase Leo an iPad to help him communicate. Now, when Leo needs or wants something, he uses his iPad, customized with pictures and phrases such as “I’m hungry” or “I need to go to the bathroom,” to tell his parents. Because his parents can easily understand him now, Leo’s behaviors have become more positive.

“It has improved his ability to let us know what he needs,” she says. “With the iPad, there are so many communication possibilities that it’s almost unlimited.”

Although the iPad has been on the market for less than two years, it’s become a very popular device for people with disabilities. Some of its factors—such as its easy-to-use touch screen and thousands of inexpensive applications (“apps”)—make it a quality assistive technology device for young children with disabilities as well.

In addition to the iPad, there’s also the smaller iPod touch or iPhone, both of which offer similar features and apps, as well as other smart phones, such as the Android or Blackberry. All of these devices offer apps for young children, with many specifically for children with disabilities. E-book readers, such as the Kindle or Nook, also have educational games for young children.

These devices offer many benefits for young children with disabilities, especially for children with speech or language delays, autism, or developmental delays. They are customizable, lightweight, and appealing to all children, both with and without disabilities. They can also help increase a child’s independence and participation in early childhood settings, such as home or child care. Certain apps, such as Proloque2Go for the iPad, help children communicate through pictures on the screen. Other apps use videos to teach children social skills.

For Minnesota parents looking into the iPad or iPod touch, PACER’s Simon Technology Center (STC) Lending Library has both devices available for families to check out before purchasing. Parents can make an appointment with the STC by visiting PACER.org/stc or calling 952-838-9000. The STC also holds workshops throughout the year on iPod/iPad apps for children with disabilities.

“Before we had the iPad, I used the STC Library several times,” Brenda says. “They gave us such great ideas. They really understand what kids like, and they know so much.”

Deciding on a Device

Because there are so many assistive technology devices available, it’s important to consider all options before acquiring an iPad, iPod touch, or other similar device. Families should ask: 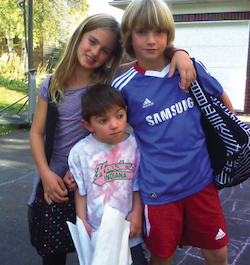 Mike and Carolyn Thomson’s 5-year-old son Finn has Cornelia de Lange Syndrome, a rare genetic disorder. They have been considering the iPad for several months as a communication device for Finn. Because he also has poor motor skills, Mike and Carolyn believe the iPad’s larger size and sensitive touch screen would work best for him.

“For Finn, the larger tablet would be most conducive to his learning and would also help him communicate,” Mike says. “He could show us when he’s hurt or hungry, and we could respond immediately. Communication is our biggest challenge by far, and I think the iPad will greatly improve his quality of life.”

Tonya Hilyard, whose 3-year-old son Sam has speech apraxia, is also thinking the iPad could replace Sam’s choice board as his main method of communication.

“I’m waiting until we write his IEP and we can see exactly where the need is,” Tonya says. “I believe the iPad would help him communicate better and help everyone understand him better.”

Sam already uses the Nook Color, Barnes & Noble’s e-book reader, to play educational games. “I have puzzles and apps for learning colors and letters,” Tonya says. “If he answers a question correctly, there are fireworks on the screen. It’s great to see him receive praise for doing it correctly.” To make sure the iPad will be the best choice for Sam, Tonya plans to visit PACER’s Simon Technology Center and compare similar assistive technology devices.

“I want to rule everything else out before I decide on something,” Tonya says. “I just want to find what will work best for him.”

What works best will vary from family to family, depending on a child’s needs. Katie Duff has found that her 4-year-old daughter Macy benefits from using Skype, a website that offers free video calling through computer webcams. Macy, who has a visual impairment with subsequent motor delays and apraxia of speech, didn’t like to talk on the phone to her grandfather, who lives in Houston, Texas. While her receptive language was good, she had trouble expressing herself and would “just mumble on the phone,” Katie recalls.

Using Skype, however, Macy can see and talk to her grandfather at the same time, making it a much different experience. “On Skype, she’s so lively and interactive,” Katie says. While they talk, Macy’s grandfather also includes some learning exercises, such as holding up flashcards and asking her to spell the object on the card.

“She probably wouldn’t have the relationship she has with her grandfather if it weren’t for Skype,” she says. “The sky’s the limit with what you can do on Skype.”

The Sky’s the Limit

Like Katie Duff, many parents and professionals are realizing the sky’s the limit with these new technologies, particularly for young children with disabilities. “The way technology is going, it’s making it easier for kids who wouldn’t have learned to communicate otherwise,” Mike Thomson says. “Many parents understand the desperation of trying outlets that come up short. That’s why this technology is so inspiring.”

Katie, who has used different devices with Macy, including Skype and the iPad, predicts that technology will play a big role in Macy’s life for years to come.

“This technology is empowering for kids with disabilities,” she says. “They need something they can do themselves and be proud of. I don’t want anything to stop my daughter, and I know technology will be a big part of that throughout her life.”