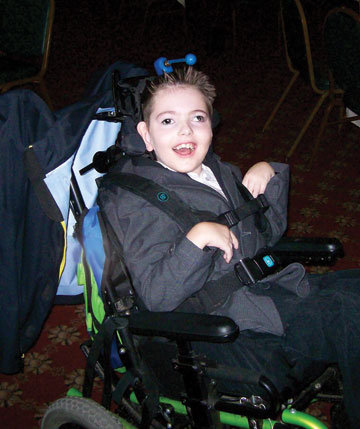 Colleen McGough-Wood sounds like a typical proud grandmother when she talks about her grandson Jake.“He’s really amazing. He’s the happiest, sweetest, most loving guy you can imagine,” she says without much prompting. “He has the most contagious laugh in the entire world.”

Eight years ago, however, those weren’t the words people used to describe the newborn. The terms were frightening: rare brain defects, septo-optic dysplasia, schizencephaly, seizures, blind, deaf in one ear, non-responsive, unable to eat, never walk.

“We knew before he was born that he’d have disabilities,” she says, but no one knew how those issues would affect Jake or the family. Awash in shock and confusion, the family turned to their doctor, who told them not to give up—and to contact PACER Center. The family did just that.

“We got help before Jake was even here,” Colleen says. “The big thing PACER helped us realize was that the earlier you connect with the experts and get into the early intervention system, the better off your child will be. Never would we have thought to obtain services so early.

“PACER gave us so many ideas, like finding a therapist to help Jake learn to eat,” she says. “They gave us names and places to go. Sometimes that’s all people need—some help to know where to start.”

Following PACER’s advice, the family immediately found a therapist who taught the infant how to suck and swallow. Thanks to that early intervention and despite those dire initial predictions, Jake learned to eat and has never needed a feeding tube. It was the first of many victories.

With PACER’s help, the family identified other services and resources that would help Jake. He has had a personal care assistant since he was born, for example. When Jake was ready to begin school, PACER helped again. “Some families want their child with a disability to be mainstreamed in every class and every field trip,” Colleen says. “We felt differently. He’s not going to benefit from math class or writing class. It’s more helpful for him to spend more time working on his speech. PACER helped us understand our rights to ask that Jake’s special education services fit his needs. He spends about half his time in the regular classroom and half outside it.”

PACER also helped the family deal with another concern. “Jake has seizures, especially if he doesn’t get enough sleep,” Colleen explains. Due to some other disability issues, he goes to bed at 12:30 or 1 a.m., so he wakes up after a typical school day begins. The family wondered if Jake had to attend a full school day. “Thanks to PACER digging into it for us, we found out he can have a modified school day, with the agreement of the Individualized Education Program team members,” Colleen says.

All the efforts are paying off. “Jake’s in first grade this year, and it’s going well,” Colleen says. “He absolutely loves getting in his gait trainer for gym class, and he loves music class. He’s able to use a head switch to turn the music on and off for the kids. And every other week, he either goes swimming or bowling.”

“He’s way more functional than we expected,” she adds. “They told us he’d never walk, but he can use a gait trainer. He can’t talk, but he can communicate. If he’s done eating, for example, he’ll clench his teeth.”

Before Jake was born, “I’d had no exposure to disability and I’d never heard of PACER,” Colleen says. Now, however, it’s her first thought when friends share concerns about their own children with disabilities. PACER advocates are always there for parents, she adds. “PACER has the ability to work with families to help them get what they need and let them be the one to make the decision about what’s right for their child. If they don’t know the answer, they’ll find out. If what they first propose doesn’t work, they tell you to call back and they’ll explore more solutions. PACER is your full-service stop,” Colleen adds. “It’s your first call and every call in between.”