Literacy Opens the World to a Child with Disabilities 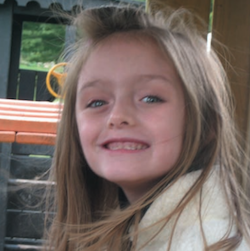 When Maddie Lewis was born full term and healthy six years ago, everything seemed storybook perfect. By the time she was nine months old, however, the tale began to take an unexpected twist. Maddie wasn’t crawling, and her language abilities, along with other skills, were slowing. Concerned, her mother, Kelly, had her evaluated, and Maddie began receiving early intervention services. Shortly thereafter, in January 2003, Kelly received the news that her first-born child had epilepsy and global developmental delay.

The news came as a shock, but Kelly was determined to rewrite the story into something with a better ending than was foreshadowed. She’s doing it in part by focusing on literacy. “Literacy is universal,” she says. More than just being able to read or write, it is a key component of learning, development, communication, and a richer life. “It’s not only about being understood, it’s about being able to comprehend your world,” Kelly explains.

For Maddie, the oldest of three children, both diagnoses influence her ability to learn. Global developmental delay affects her fine and gross motor skills, social-emotional development, daily skills, and cognitive abilities. Her epilepsy manifests as absence seizures—short, subtle slowdowns in her brain. Kelly describes the seizures as like a “pause/play” button that slows Maddie’s processing and learning.

“Focusing long enough to absorb a letter or sight word has been hard for her,” Kelly explains. “The seizures slow her cognition, and she processes at a slower pace.”

To compensate, Kelly uses several approaches to help Maddie learn. One way is by focusing on multiple learning styles—visual, auditory, tactile, musical, kinesthetic, and more. “Maybe looking at an apple isn’t enough,” Kelly says. “Maybe she needs to hold an apple, bite it, do an apple puzzle. She needs to wake her body up.

“There’s more than one intelligence,” Kelly adds, “so I might put clay on a plate and have her write her name in it. She sees it and feels it; she moves and controls it with her finger. You look at your child’s primary way of learning, but that’s not all you use. You raise the bar so they don’t feel intimidated but challenged.”

Another approach is to help her look at picture books and talk about what she sees. It improves Maddie’s “ability to recognize pictures, what’s happening in it, and generalize it into her environment,” Kelly says. “If you can’t understand the picture and what’s happening, you can’t associate it with the label or the letter.”

Predicting what’s going to happen next in a story is also part of learning and literacy. “A child has to be able to sequence—to listen to a story and know what’s coming,” Kelly says. “She needs to learn how to anticipate and be able to describe what she sees. One of the tools we use is taking pictures out of a magazine and focusing on the subject, the noun, and verb. I say, ‘tell me a story.’ It gets her to think about what she sees—are the children in the picture happy or sad? Are they running?” When she can do that, she has increased her attention, and that means she can better focus and learn. By looking at people’s faces and body language in a story, Maddie also learns nonverbal cues of communication.

At school, Kelly has worked closely with staff to identify ways to reach specific literacy goals for Maddie. They made her a classroom helper to help her attend and learn sequencing. They changed her speech and occupational therapy to focus on letters and are using computer-based literacy games to support reading and literacy skills. They’re also finding library books on audio so she can pace herself.

Literacy also helps Maddie learn about herself and her feelings. One book she loves is “Today I Feel Silly & Other Moods That Make My Day,” by Jamie Lee Curtis. A fun rhyming book about emotions, it ends with the question “how do you feel today?” and includes a mood wheel where readers can manipulate a character’s eyes and mouth to show their own emotions. “The most important thing I can give my child is self-love,” Kelly says. “I want her to know her feelings.” When Maddie reaches that last page, “she now actively says, ‘Here give me the page, I’ll tell you,’” Kelly says. “We end our day with it. She is able to self-reflect. If she can do that, she can get her needs met.”

Literacy is more than knowing letters and words and reading. It is the main character in a lifelong story about learning, communication, self-awareness, and fulfillment. By finding a variety of ways for Maddie to gain those literacy skills, “I’m creating her potential,” Kelly says. “You want the child to love learning like a dog to a bone,” she adds. “It’s a lifeline to maximize the child’s potential into the future.”